Seventy five members of the port Authority of New York and New Jersey were lost on September 11, 2001.  Thirty seven were members of the Port Authority Police Department, including three of the band's drummers: Liam Callahan, Steven Huczko and Richard Rodriguez.  This devastation did not prevent the band from performing its most solemn task; a funeral for a fallen police officer.  In the months following the attack, the band with the assistance of the New Jersey United Pipe Band, played at over forty funerals and memorial services, sometimes two or three a day even on one occasion five. 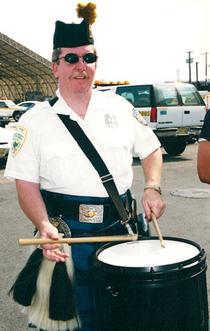 The Port Authority Police Department Pipes and Drums are proud to announce that they will once again be awarding up to (3) Memorial Scholarship to honor the heroic actions of the three band members who died in the attacks on America on 9-11-2001.

Port Authority Police Officers Liam Callahan,  Steve Huczko and Richie Rodriguez were on duty and responded to the World Trade Center to assist in the evacuation and rescue of thousands of people inside the Twin Towers.  Tragically, they were inside the buildings when they collapsed.  Rest In Peace to our fellow band mates, officers and friends.

Through this scholarship, the band would like to honor their unselfish acts and provide educational assistance for a student with a musical background to follow a similar career path. 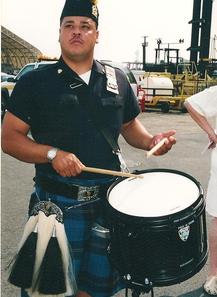 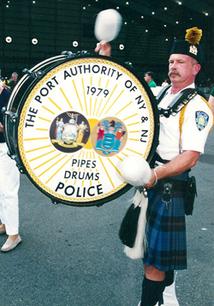 Officer Liam Callahan, forty-four, was a member of the Port Authority ESU. A veteran with over twenty years of service, Callahan once saved the life of a man who tried to jump off a roof of the Port Authority Bus Terminal. He won a Valor Award in 1993 for rescuing disabled people during the World Trade Center bombing. An Irishman who was proud of his heritage, he was a drum sergeant for the Port Authority Pipes and Drums band. He and his wife, Joan, had four children: Brian, Bridget, Ellen and James. A frequent volunteer at the children’s school, he was often a chaperone on cafeteria lunch duty. An active member of St. Cecilia Church of Rockaway, he was well known for the pancakes he cooked at church functions.

Officer Stephen Huczko, forty-four, a fifteen-year veteran of the Port Authority Police, was last seen by his wife, Kathleen, before he went to work on September 11. He, along with colleagues Officer James Parham, Chief James Romito, Lieutenant Robert Cirri, and Captain Kathy Mazza were found buried with a woman they were trying to rescue. Huczko was born on Staten Island. While studying nursing, he worked as a police officer on the night shift at Newark International Airport. He graduated with a nursing degree from Raritan Valley Community College in Somerville, New Jersey, in 1995. Huczko was with the Port Authority during the 1993 World Trade Center bombing and the Federal Express plane crash in 1997 in which an MD-11 cargo plane carrying hazardous materials flipped onto its roof and burst into flames at Newark International Airport. All five people aboard the plane climbed to safety. A bass drummer in the Port Authority Pipes and Drums, Huczko is survived by his wife, Kate McGuire, and their four children, Kaitlyn, Liam, Cullen and Aiden.

Officer Richie Rodriguez, thirty-one, was hired by the Port Authority Police Department in April, 1993. A drummer in the Port Authority Pipes and Drums, he went to the Twin Towers on September 11 with Captain Kathy Mazza. Rodriguez was born in Perth Amboy, New Jersey. He graduated from Perth Amboy Vocational Technical High School and attended Middlesex County Community College in New Jersey. Though he studied technical drafting at school, he found an interest in public service while volunteering with the first-aid squad in Perth Amboy. He told people he knew he’d won the lottery when he was offered a position with the Port Authority eight years ago. His first assignment at the Port Authority was in the tactical response bureau, where he trained for special duty to protect the U.S. President at Newark International Airport. Three years ago, he became an instructor at the Police Academy, where he taught patrol operations, motor vehicle stops, water rescue, emergency vehicle operation and radio procedures. He also coordinated the installation of and training on mobile video cameras. Officer Rodriguez is survived by his wife, Cindy.